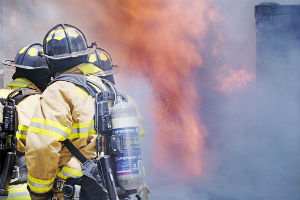 DETROIT, MI – A woman was killed Tuesday night on Detroit’s west side, the result of a firebombing. Unfortunately, the blast left her “burned beyond recognition” according to local police.

Police report the fatal firebombing occurred around 11:30 p.m. at the New Blue Star Lounge at the 1000 Block of Joy Road, just west of Wyoming. They discovered the victim in the upstairs area of a building on the block.

Police detectives maintain a man tossed a flammable device at the building. Moments later the building caught fire and was rapidly swallowed up in flames. Witnesses police that the man left the crime scene in a large vehicle. Furthermore, they identified the car as possibly a Chevy Avalanche, however, they couldn’t verify this.

Police are still investigating and no motive has been provided.

Unfortunately, authorities declared the victim dead at the scene. However, the Wayne County Medical Examiner will determine the official cause of death.

The firebombing was just the latest murder in a city that ranks 2nd highest in violent crime for big cities with over 100,000 residents. The murder rate in Detroit, however, has been in decline in recent years.

Residents Urged to get Vaccinated and Boosted as Omicron Surges on