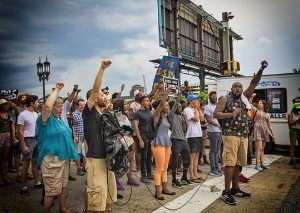 DETROIT, MI – A group of folks outfitted in bright red shirts of various anti-gun violence organizations showed up out front of downtown’s beloved Spirit of Detroit statue on Sunday. The group gathered in this location to honor victims and to urge for gun law reform.

The people assembled under a gray sky around 3 p.m. for the rally. The proceedings started with a moment of silence and then those present offered up the names of people who’d been lost to violence. Names like Marcus Buckley, Freddie Harvey, Kyle North, Scott Smith, and on and on.

People who themselves were gun violence survivors, the relatives of victims, students and parents, all got vocal about the need for change. They toted signs like “Are our lives worth your guns?” and “Close the loopholes.” Overall, the written displays demonstrated a frustration with the ongoing gun violence across the country. This comes on the heels of El Paso and Dayton.

After Sheffield talked to the crowd U.S. Rep. Debbie Dingell, D-Dearborn, issued an intense, pull-no-punches speech that revolved around her own personal gun story. She even discussed how she had to hide from her mentally unstable father who happened to be a gun owner.

Others who were in attendance included a Kalamazoo couple, Rick and Martha Omillian, whose daughter was killed 20 years ago. She was gunned down by her ex-boyfriend in a dorm room.

Over the weekend, the Michigan Democratic Black Caucus ... Read More