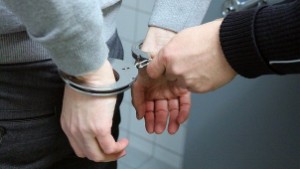 A Detroit man with no criminal record endured three days in jail after police approached him for jaywalking in Greektown in 2017. At the time police officials charged him with no crime. Consequently, the seemingly unjustified jail term led to a civil lawsuit which ultimately settled last month for $45,000.

The incident at the center of this storm occurred in June of 2017. Steele Hughes had exited Fishbone’s restaurant in Greektown with his soon-to-be wife. The couple headed towards a downtown parking structure. However, when traffic cleared, Hughes crossed Monroe street, technically jaywalking, and was confronted by three officers.

Apparently, an officer then beckoned for the couple to get out of the street. They did just that but the officers didn’t relent. They grabbed Hughes and threw him to the ground. Surveillance video from nearby captured the scuffle which developed rapidly.

People in the vicinity took out their cell phones and filmed the incident with Hughes on his back and three officers towering above him. In the video Hughes is heard loudly asking “What did I do?”

Police cuffed Hughes and in front of his fiancé and a large crowd, shoved him into a squad car and escorted him to jail. They accused him of disorderly conduct and obstructing police. Detroit Police say the reason for the arrest was based on Hughes “shrugging violently away” and for allegedly cursing at them. Hughes say it didn’t happen.

“I would have no reason to attack three armed officers in downtown Detroit after a date night,” Hughes said. Also, Hughes was not carrying a weapon.

Adding another layer to this story is that Hughes then spent 3 days behind bars in an orange jumpsuit. Upon his release from jail he learned that he’d been suspended from his job for two weeks or until his criminal case played out. But quickly after the Wayne County prosecutor determined that no crime was committed and they didn’t pursue charges.

The attorney for Hughes says it’s incredibly scary to think what would’ve happened if people weren’t filming the event. “if there weren’t people out there with cameras, this could have escalated and he could be dead,” Herbert Sanders said.