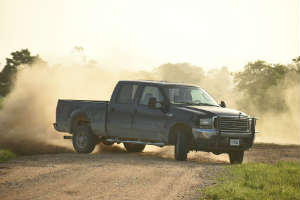 This year, Detroit automakers, the top three in the industry, are bringing out new, or considerably updated, heavy-duty versions of their trucks. In fact, this is the first time in years that the companies are doing this at the same time. So – what does this mean for consumers?

There is sure to be a wave of ads and competition between the automakers. Fiat Chrysler, General Motors, Ford, and Chevrolet are rolling out their contenders…

Last year, pick-up trucks from the Detroit automakers were actually the three top-selling vehicles in the country. They totaled more than 2 million dollars in sales. About thirty percent of those include heavy-duty vehicles, bigger frames, interiors, beds, and engines. These trucks work for consumers who need to haul and tow large things.

As Sandor Piszar, a truck marketing manager for General Motors’ Chevrolet brand, says: “Capability is really important for these folks. They’re often times towing something that’s even more valuable than the truck itself. It enables what their lifestyle is.”

Now, all three companies are offering special features to help with towing, backing up, viewing surrounding traffic, etc. These are electronic features such as cameras.

Fiat Chrysler’s brand, Ram, started the competition this year. In January, they unveiled a new heavy-duty pickup. This is the 2019 Ram that goes on sale in April. It is complete with an optional 400-horespower, 6.7-liter six-cylinder diesel along with 1,000 pound-feet of torque. Apparently, the truck can pull over 35,000 pounds. And, it can carry 7,680 pounds in the bed.

General Motors’ GMC brand came out with their heavy-duty Sierra. According to the vice president of marketing, the truck is expected to tow more than 30,000 pounds. And, it has a 6.6-liter diesel with 445 horsepower, as well as 910 pound feet of torque.

Then, there’s Ford. They will reveal the new Super Duty version of the F-Series this week. In fact, it is set to display at the Chicago auto show. And, the news is that the truck offers the highest towing and payload ratings the company has ever had!

Chevrolet also plans to unveil its latest – the new Silverado heavy-duty truck. While it is similar to the Sierra, it is considered a bit less posh. The Silverado is set to debut in the middle of the year, while the Sierra comes out in late summer.

Clearly, truck buyers (and lovers) can expect a lot this year! What will be the best new truck of the year? What are you most excited to see?

Detroit Police Department Mourns the Loss of a Police Officer

Tips for Becoming a Truck Driver